When we left Seattle Children’s Hospital with Luella four months ago, we were warned  against comparing Luella’s development to typical baby milestone charts.  The doctors stressed that Luella would develop at her own pace and expecting her to reach milestones at the same rate as babies without brain injuries would be setting ourselves up for disappointment.

We’ve heeded their advice, (mostly) letting go of expectations and allowing “Luella to do Luella”.  Even so, I couldn’t help but notice when she reached three-months-old and she still wasn’t smiling.  I did my best to elicit grins: I sang in a nauseating falsetto, I peeked, I contorted my face, I contorted/peeked/falsettoed and then falsettoed/contorted/peeked…and nothing.  Despite my best efforts, she continued to stare back at me solemnly.

She passed four-months-old with nary a grin and when the infantile spasms set in, she was not only still unsmiling, she was nearly unresponsive.

And then, around Thanksgiving, it happened.  With steroids holding the spasms at bay, she came out of her fog and made it to the happiest milestone of them all: big, fat smiles.

The smiles are coming regularly now, along with epic bouts of cooing.  These milestones are coming further apart than other babies, but you guys? They are so worth the wait.

(Health Update: Luella’s EEG from last week was all clear of infantile spasms, so we are continuing to wean her off of the steroids!  Hooray!  In January, we will have yet another EEG to see if the spasms are still eradicated, as well as visits with several other specialists.)

Baby Luella came into the world on one wild ride.

Quite literally: just hours after being born by a planned home birth turned emergency c-section, she was airlifted with Mike to Seattle Children’s Hospital. Luella had severe meconium aspiration (i.e. she pooped in utero and swallowed it) and wasn’t breathing for several minutes after birth.  Understandably, this caused a whole host of issues with her lungs and brain. She stayed for three weeks in the NICU and another three weeks in a regular inpatient unit. 45 days after she was born, she was finally able to come home and start the life we imagined, albeit with a few additional accessories.  Luella had at-home, full-time oxygen for a month and, now at five-months-old, still has a feeding tube that goes up her nose and into her stomach. 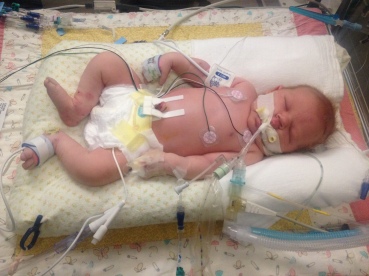 Luella’s lungs are largely recovered after being filled with sticky, tar-like meconium although we still have to be very careful to prevent her from getting sick and stressing out her system.  She no longer wears oxygen during the day; you never appreciate having an untethered child until you can’t carry your baby more than 30 feet from their oxygen tank!

Unlike her lungs, the progress of Luella’s brain recovery has been less linear.  She had a seizure after birth and an MRI soon after showed that she has injury to about 15% of her brain.  This injury means Luella has had to learn many things that come naturally to most other babies.  Most notably, she has had difficulty learning how to swallow effectively and has a feeding tube for the majority of her food.  While she now takes some bottles, we have to thicken her milk while she figures out how to manage the mechanics of her swallow.  Luella also has other developmental delays and will likely continue to face developmental challenges as she gets older. 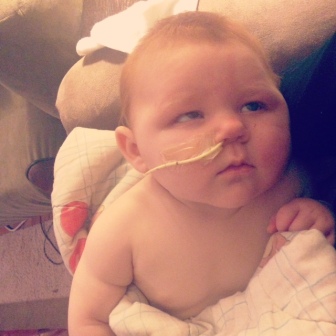 Four months after she was born, Luella began exhibiting some odd, jerking behaviors.  Neurologists diagnosed her with infantile spasms, a rare  and serious disorder that completely stunts her development until the disorder is under control.  Luella began taking a very high dose of steroids to try to eradicate the abnormal brain waves associated with the disorder.  Her last EEG (brain wave test) showed the abnormal brain waves were resolved, but we recently began seeing some suspicious activity that may be spasms or other seizures.  We will continue trying to wean her off the steroids if her upcoming EEG still looks okay.

These days, Mike and I double as parents and psuedo-medical professionals.  We administer seven daily medications, put down feeding tubes, get weekly blood pressure checks, and talk to doctors and pharmacists more than we talk to our friends.  We also do a lot of “normal” parent things, like change a million diapers, go on walks, take snuggly naps, and take so many pictures that my phone constantly warns me that the “memory is almost full”.

All this to say that answering the kind question,”How’s Luella?” is complicated and different every day.

But different can be good, right?

Check back here for updates on the babe, pictures of household items my dog mangled, and rambling thoughts on a completely random assortment of issues.

When life gives you lemons, remember that citrus fruits are awesome.